Welcome to our new monthly Market Conditions blog, where we examine important on-chain, technical or social analytics. The following is a review of what happened throughout the month of January and what we might expect moving forward… 📈

Amber is a savings platform. We know ₿itcoin is better money. 9 times out of 10, HODLing will see you perform better than any attempt to trade Bitcoin. Having said that, it is cool to have a look at some of the different metrics that can help you gain a deeper understanding around price action…

This report is for personal interest and entertainment purposes only. This is not financial advice…  If we were to give financial advice – which we absolutely would not do – we might say something like this: Keep it simple…

Bitcoin has so many aspects to it – mathematical, philosophical, technical, cultural, and more. Bitcoin metrics are a fascinating aspect you can learn to increase your overall knowledge about Bitcoin. There are hundreds of different Bitcoin metrics to view and interpret. Each tells a story. The better you become at interpreting these metrics, the more comfortable you will feel during volatile and changing market conditions. Removing emotion out of the equation by looking at the metrics will allow you to have confidence saving and stacking stats, even when market fear is at an all-time high.

Important to note, like tea leaf reading and astrology, these metrics should be taken with a grain of salt. They only indicate previous market behaviour, and are not a guarantee of future performance. The Bitcoin market is made up of numerous variables and many fall outside of the charts we look at here.

The Metric Explained: “HODL Waves present a macro view of the age distribution of the coin supply. They also provide insight into changes to this age distribution arising from hodling and spending behaviour” – Glassnode.

HODL Waves can be understood as the amount of people who have either moved or spent their coins within a specific time period. As the number of people who HODL (don’t move their coins) goes up, the wave rises. By contrast, as more sell and don’t HODL their coins, the wave will trough.

HODL Waves are an interesting metric to look at this point in the Bitcoin bull market. The chart above shows a significant downtrend in the HODL wave after May 2021. One might presume, looking at 2017’s HODL wave post bull run peak, that May was the height of the bull run for this most recent four-year cycle (if, such a thing still exists). Despite the sell-off from Bitcoin holders (of less than 6 months), the market continued to reach its current all-time high in November of 2021.

Since November 21, this metric seems to have broken its historic pattern of price peak, then sell-off, and you might think the current Bitcoin price isn’t being affected as much as usual, especially by those who have only held their coins for 6 months or less.

Currently, this particular HODL Wave sits at 23.13% of total supply. This is the lowest in Bitcoin’s history, surpassing the previous all-time low of 23.72% on 22 October 2015. It’s easy to think this might be a bad thing, but it’s neither bullish or bearish:

The Metric Explained: Bitcoin relative Long-Term Holder (LTH ) supply is the percentage of supply held by long term holders: we call them diamond hands. Glassnode defines an LTH as someone who has held their coin(s) for 155 days or longer. Historically, this has been the timeline for when a short-term speculator or trader becomes a long-term investor. These long-term holders do not include addresses that are known exchanges, where coins usually sit in one place.

Ever since Bitcoin reached an all-time high in November 2021 some of these long-term holders appear to have been held under water. No worries. Most Bitcoin holders understand the fundamentals of Bitcoin and the problems it solves. Therefore, they are more likely to HODL their coins no matter what price they buy them at. With just over 80% of Bitcoin being held by long-term holders, we are still in impending ‘supply-squeeze territory’.

In this zone, the possibility of a parabolic price rises significantly, since the majority of Bitcoin holders will typically hold their coins regardless of price (these are the diamond hands). If this metric continues to rise, less and less Bitcoin will inevitably be available on the market. Expectations are that Bitcoin follows an adoption curve similar to that of the Internet. If so, Bitcoin will become even more scarce in the years to come.

Number of Addresses with Balance ≥ 0.01

The Metric Explained: This metric explains the number of Bitcoin addresses with equal to or greater than a 0.01 balance.

This metric has no direct relation to price whatsoever. It only shows the network growth over time. Recently, some 9,476,476 addresses have hit the 0.01BTC (1,000,000 satoshis) threshold, all with a wallet price of $380+ USD at the time of writing.

This is an all-time high for wallet addresses with less than one million sats. Some may argue that this metric is more important than an all-time high in price, because it shows that the adoption of Bitcoin is increasing over time and that adoption is likely to grow much faster from here.

The Metric Explained: The Mayer Multiple is a technical analysis indicator used by traders to judge how well priced Bitcoin is at the current moment. You can judge whether Bitcoin is oversold or overbought by looking at what the multiple is.

Historically, anything underneath 2.4 on the Mayer Multiple was a great time to buy and anything over was considered overbought, indicating FOMO has entered the market.

Last month ended with a 0.76 on the Mayer Multiple (MM). Since the start of this year, the MM has been under 1.0. Historically, this indicates that Bitcoin is seriously oversold. People will look back on the MM in the month of January as a buying opportunity similar to July 2021 or March 2020.

MM’s this low have only occurred for 15% of Bitcoin’s entire existence. Despite the Mayer Multiple having reached over 2.4 twice already this bull run, it is no indication that the market top is in already. Why? Because the current all-time high was hit with a Mayer Multiple of just under 1.5. This is a very comfortable level, which gives no indication of the asset being overbought.

The Metric Explained: The Bitcoin Annual Transfer Volume is an on-chain analysis indicator used to judge Bitcoin’s ability to transfer wealth in comparison to other methods.

The significance of Bitcoin’s 2021 annual transfer volume cannot be understated. Bitcoin has changed. 2020 saw an annual transfer volume of $2.3 trillion which 2021’s volume overshot by more than 5 times. Distilling down this volume to a daily amount, almost $36 billion is being transacted everyday across the Bitcoin network. That’s a little over 750,000 Bitcoin per day..

The graph above shows how important 2021 was for Bitcoin’s adoption. Even though we saw a significant rise in price, it is the overall settlement volume that is causing many institutions to get excited. Bitcoin transacted more than Visa by over 120% of their total settlement volume. These numbers highlight the emergent strength of Bitcoin.

An open-sourced code that settles over $13 trillion in a year with only 106 million Bitcoin users? Woah. Visa and Mastercard better be sleeping with one eye open… 👀

January sure was a slog, in terms of Bitcoin price. Nonetheless, the Bitcoin metrics above clearly show something is happening; building, growing; moving forward. With the number of addresses growing and supply continually being moved to stronger and stronger hands, the price floor is not just being set, it’s hardening.

We’re entering a unique moment in market behaviour. This is something no one has ever seen before. What we’re witnessing has never before been reflected in previous bull runs. Current conditions might be full of chop, but, for the months moving forward all indications suggest we still have a lot of room for price growth. Take a look at Greg Foss’ Flowchart below…

Contrast the US National Debt hitting a red hot $30 trillion (with a ‘T’) with Bitcoin’s $13 trillion dollar annual settlement volume and it becomes clear how this maturing asset class is moving into a new phase of adoption. Even though calls for $100K by the end of 2021 weren’t met. Don’t sweat it. You’ve got more time to stack and save more sats with Amber – and at a nice little discount too, to help you hit your sat stacking goals. 🔥

The Bitcoin space is moving fast and we’ll do our best to help you keep up! Stay tuned for February’s Market Conditions report, coming soon… 🚀

Understanding markets and metrics makes becoming a diamond hand HODLer that much easier. Help us set the floor… 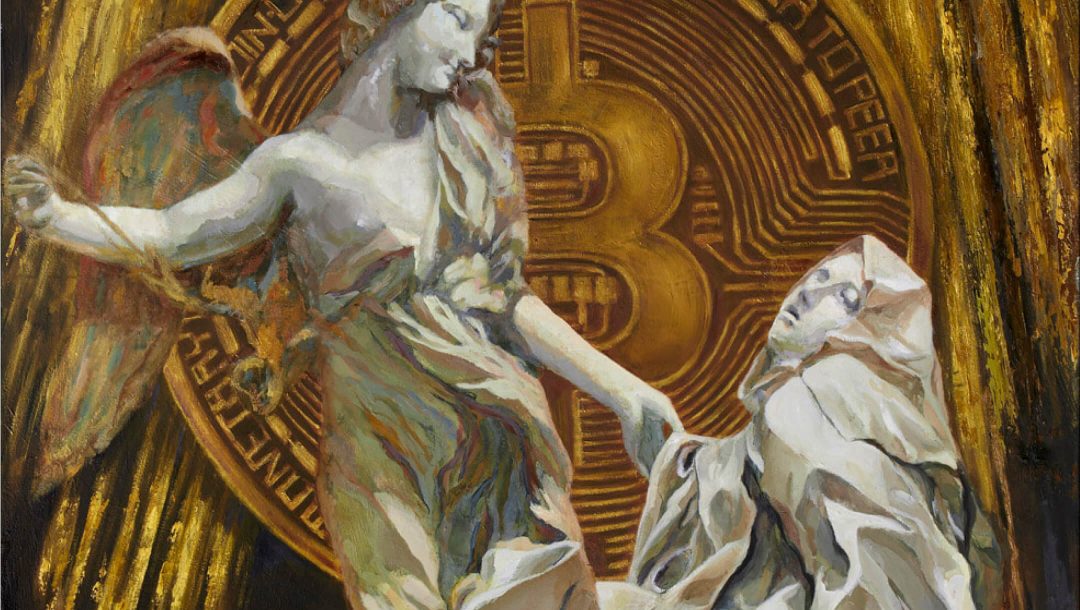 Eight Ways to Fight the FUD